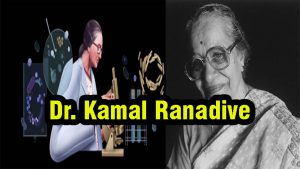 Dr. Kamal ‘Bai’ Ranadive is also well known as a Pioneering cancer researcher. Today Google is celebrating its 104th birthday anniversary by giving her Tribute as Google Doodle. In this doodle, it illustrated that an old lady wearing glasses and holding microscope. It is demonstrated that she is researching something. This doodle is designed by Ibrahim Rayintakath, an India-based artist. You can read about Kamal Ranadive below.

Google always updates the doodle to give tribute to some famous public figures. Today also Google selected Kamal Randive as his doodle Image. Kamal Ranadive was born in Pune on 8th November 1917. Her father Dinesh Dattatreya Samarth was a biologist who taught in the Fergusson College, Pune, and also encourages Ranadive to pursue education in the medical field. She received a doctorate in cytology in the year 1949. For those who are not from the medical field, let me tell you that Cytology is the study of cells.

“She was working at the Indian Cancer Research Center (ICRC) as a researcher when she received her doctorate. She completed her fellowship at Johns Hopkins University in Baltimore, USA. She then returned to India and started the country’s first tissue culture laboratory in Mumbai.”

As per Google Doodle Statement, Ranadive was the director of ICRC and a developer in animal modeling of cancer development became one of the first researchers in the country to suggest a link between breast cancer and heredity. In her professional career, she had done research on the pathophysiology of cancer through the medium of animals which led to a further appreciation of causes of diseases such as leukaemia, breast cancer, and Esophageal cancer. She was the one in the team to identify the links between certain viruses and cancer.

Ranadive was an Emeritus Medical Scientist of the Indian Council of Medical Research (ICMR), in 1973, founded the Indian Women Scientists’ Association (IWSA) with an aim to support women in scientific fields along with her 11 colleagues. They also provide scholarships to their students.

She was awarded by Padma Bhushan for Medicine in 1982. In 1964 She was also awarded First Silver Jubilee Research Award. This award includes a medal with a cash award of ₹ 15,000. In the same year, she was also awarded G. J. Watumull Foundation Prize in the micro-biology subject.